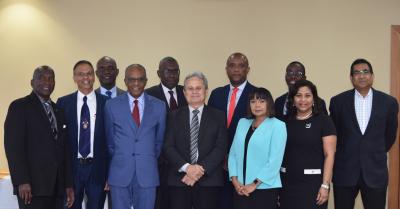 On Thursday February 21st, 2019, The Hon. Colm Imbert, Minister of Finance, presented instruments of appointment to new members of the Board of Directors of the Central Bank of Trinidad and Tobago (CBTT).

Section 5 of the Central Bank Act, Chap. 79:02, as amended by Act No. 23 of 1994, provides for the CBTT to be managed by a Board of Directors, comprising a Governor, not more than two (2) Deputy Governors and not less than six (6) other directors, two (2) of whom may be public service directors.

Section 8, subsection (2) of the Act states that:

their experience and capacity in matters relating to finance, economics,

Based on the foregoing, Cabinet recently agreed to the appointment of the under-mentioned persons, as members of the Board of Directors of the CBTT for a period of three (3) years, with effect from the date of their Instruments of Appointment, in accordance with the provisions of sections 5, 7 and 8 of the Central Bank Act, Chap. 79:02:-

The Board of Directors of the CBTT will therefore now comprise of the following persons: