All expenses to be reviewed—AG 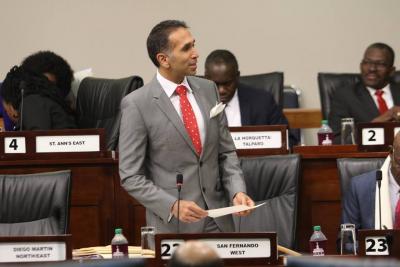 October 13, 2015: Attorney General Faris Al-Rawi estimates about $1 billion in legal fees were paid to attorneys by state enterprises and ministries during the People’s Partnership administration’s tenure, with million-dollar sums paid to some, including one attorney who was paid $60m and $1.3m earned by another who was “eight months out of law school.”

Speaking in yesterday’s 2016 Budget debate, Al-Rawi said from now, senior counsel will only be used where required with junior attorneys, and all expenses will be reviewed. He said payment will be based on “quantum merit” and vouching for hours of work done.

The AG did not identify any of the lawyers who benefitted under the previous administration.

Al-Rawi said the Ministry of the Attorney General, Justice and Legal Affairs collectively received in the last five years, $5 billion. He said taxpayers should know what value for money was obtained for this and what benefits were accrued for an estimated $13b spent (under sectoral heads) over the same period. He said there was a lot of room for improving efficiency by improving spending efficiency.

Al-Rawi noted the sum of $444m had been identified in the last term as legal fee payments by one ministry alone between 2010-2015 regarding lawyers who were not full time, hired by the AG’s division then.

He also sought a list of legal fees for 107 state enterprises and after initial review got a report from 60.

The sum spent by the 60 was $292.2m in legal fees and of the 22 ministries now existing under the new administration, a handful reported legal fees ranging from $1.9m to $155.3m, he added.

He estimated total legal fees would be around $900m for the five years and “conservatively” would eventually total about $1b when all other state enterprises reported.

Al-Rawi questioned the “legacy” which the payments had brought taxpayers. He noted that Prime Minister Dr Keith Rowley, while in Opposition, noting the expansion in legal fees in the PP’s second Budget, had warned against PP witch-hunting in the event expenditure associated with this became a scandal.

Within the $900m sum in those agencies which have reported so far, Al-Rawi listed a number of figures paid to lawyers whose names he didn’t call (See box).

In adding up 11 lawyers only, he said this for instance totalled $245.2m. He said this included one who was eight months out of law school and who earned $1.3m. Al-Rawi also alluded to another who earned $60m.

Al-Rawi said a “scandalous” situation had occurred with partial proclamation of the Children’s Authority Act regarding children’s homes under the PP’s Gender, Youth and Child Development Ministry. He said the situation resulted in the relevant children’s homes not being capable of legally housing youths in detention.

He said former attorney general Anand Ramlogan is however prosecuting a case regarding housing of such detained youths and was “ensuring the state pays damages” as a result of his (Ramlogan’s) government’s proclamation moves on the matter.

Al-Rawi said the state has had to pay sums ranging from $125,000 and $250,000 to litigants on the issue. He said 72 youths were detained in the nation’s penal system and he could see such payments mushrooming among the number. Consequently, Al-Rawi said an emergency situation now exists and the new government’s public sector plan will have to deal with the issue concerning children’s homes.

Al-Rawi said expenditure was also incurred in the proclamation of the Proceeds of Crime Act—and Ramlogan is also challenging a matter on this legislation. Al-Rawi said the PP Government didn’t do what it was supposed to do with this act. He claimed Ramlogan was now profiting from this. Al-Rawi also said PP also had as attorney general Garvin Nicholas. Rowley at his side muttered “political enterprise...”

During cross talk during his contribution, House Speaker Bridgid Annisette-George warned MPs to respect each other.

No forensic audit of LifeSport

The Attorney General’s office will establish a tracking committee on death penalty issues and Assizes matters including to say why the penalty isn’t being implemented, since Government intends to apply the law and due process, Attorney General Faris Al-Rawi also said.

He also said no forensic audit by the AG’s office was called into the ill-fated half billion Life Sport programmes. He said he’d checked with the Finance Ministry and found this.

Al-Rawi said he intends to do an immediate revision of matters occupying state attention with objectivity and transparent advice, and ensure institutional strengthening for the AG’s office.

Al-Rawi said in his first week at the ministry, he found 100 large garbage bags filled with shredded documents—government property—piled to the ceiling.

He added: “Up to now I can’t get an explanation why the shredders were at work over the weekend and why it was done that weekend, no one knows who shredded it...”

The AG said he found a 2014 legal opinion on LifeSport that a forensic probe was needed to compile evidence which was needed to decide if action should be taken against public officers in the issue and if there was any real or “fanciful” chance of recovering money. He said examination of LifeSport found breaches of “everything possible” yet the public servant named in the issue was appointed to the Prime Minister’s office and the issue is still under probe.

Al-Rawi said he’s instructed attorneys to write former prime minister Kamla Persad-Bissessar, past national security minister John Sandy, the past AG and retired DCP Mervyn Richardson to give evidence regarding report of an alleged assassination attempt on PP MPs. He said if they didn’t respond they would be subpoenaed and “treated as hostile witnesses.”

Al-Rawi also said he’d asked the PP-appointed Las Alturas Commission of Enquiry if they wanted an extension and the PNM government would ensure all commissions continued. He said the COE has sought extention and an “uplifting” fee. But he said the commission in pursuit of the $26m issue had so far spent $18m on legal fees.