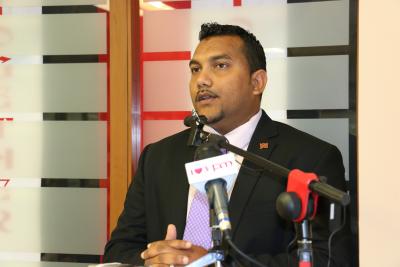 In what he described on social media yesterday (12/04/2018) as a “particularly disheartening” occurrence, Parliamentary Secretary in the Ministry of Agriculture, Land and Fisheries (MALF), Senator Avinash Singh, extended a heartfelt, condolence message to the family and friends of Mr. Leon Bebe - a 19-year old Gasparillo farmer, who was killed on Tuesday of this week in Barataria. This he did on behalf of his own family and that of the management and staff of MALF.

Senator Singh, who revealed that he had spoken to a relative of the family, said it was his hope that the perpetrators of this heinous crime “will soon be brought to justice”. He said in his Facebook post: “As a young entrepreneur, whose dedicated vocation as a hydroponic farmer served to champion our journey towards a more food secure nation, the untimely death of 19-year old, Leon Bebe, is particularly disheartening not only to me but to the fraternity of those who continue to labour selflessly at achieving this end.”

The Parliamentary Secretary added that as a young person himself, he could only “imagine the extent of anguish that [Bebe’s] passing will have on those closest to him having regard to the circumstances surrounding his departure and the presumed impact of his full potential which now, will forever be unknown because of the reckless decisions of another and / or others”.

In his words of encouragement to the bereaved family, Senator Singh added: “May the comfort and guidance of God’s unwavering love and protection continue to be your counsel in chief, during this time of grief.”