Agriculture Minister responds to claims made by rice farmers 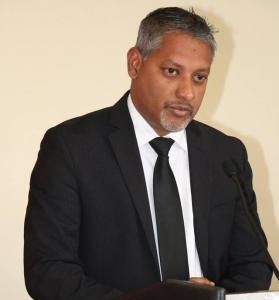 November 30, 2018:- The following is a statement by Senator the Honourable Clarence Rambharat, Minister of Agriculture, Land and Fisheries, on issues relative to local rice farmers, which are at present, in the public domain:-

“Following the October 2018 flooding, I personally visited rice farmers in Chaguanas West accompanied by Ganga Singh, MP, the Ministry’s Caroni County Officer and the extension officers attached to that area. Before and after that visit and my meetings with the rice farmers that day, the Ministry’s Caroni Office conducted visits to affected farmers and has been receiving flood assistance claims. Claims submitted by certain rice farmers from Chaguanas West and surrounding areas have been questioned by the officers. For the Bejucal area where the Ministry’s records show that 1100 acres are cultivated in rice, claims have been made for 2200 acres. Farmers who are recorded as having less than 100 acres under cultivation have claimed 700 acres. Multiple claims have been made for one parcel and some farmers have made claims for parcels of land which they do not cultivate. These matters are being investigated by the Caroni County Office and none of these inflated claims will be submitted for consideration for flood damage assistance. This decision to challenge this practice of inflated claims is at the heart of the small gathering outside the Ministry’s Head Office in Chaguanas on Wednesday 28th November, 2018.

I have since referred the matter to the Fraud Squad of the Trinidad and Tobago Police Service.

I have also taken note of comments attributed to rice farmer Richard Singh regarding the Agricultural Development Bank (ADB). On June 12th, 2018, in response to two Motions on the adjournment filed in the Senate by Senator Wade Mark I addressed several matters relating to Mr Singh, the ADB and payments to rice farmers by the National Flour Mills. I debunked all the misinformation in the public domain. In response to the more recent matters I refer to my June 12th, 2018 response in the Senate, when I said that Mr Singh received a $3.1 million loan from ADB. I can now say that in October 2018 the loan was restructured; the accounts are all up to date; the renewal included a six-month moratorium so that interest is due March 31st 2019; and thereafter the loans have semi-annual payments so that the next installment will be due September 30th 2019. I disclose this information in the public’s interest so that ADB as a financial institution is not put to risk.

I am satisfied that ADB has gone beyond the call to address the needs of Mr Singh.”

Minister of Agriculture, Land and Fisheries