Agriculture Minister commits to focus on lease distribution in 2018 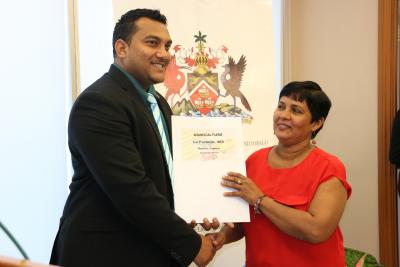 Parliamentary Secretary in the Ministry of Agriculture, Land and Fisheries, Senator Avinash Singh, assists in the distribution of an agricultural lease at the Ministry’s corporate headquarters in Chaguanas on Tuesday 9th January, 2018. The gesture formed part of an Agricultural Lease Distribution Ceremony held for a total of forty-seven (47) former VSEP workers of Caroni (1975) Limited.

The transfer of lands owned by Caroni (1975) Limited for the construction of schools and certain housing developments in the country have not been completed to date and have carried with it, particular challenges which staff of the Ministry of Agriculture, Land and Fisheries (MALF) now contend with. Such was the disclosure made by the Minister of Agriculture, Land and Fisheries, Senator the Honourable Clarence Rambharat, during an Agricultural Lease Distribution Ceremony held for a total of forty-seven (47) former workers of Caroni (1975) Limited at the Ministry’s corporate headquarters in Chaguanas on Tuesday 9th January, 2018. During his Feature Address, the Minister alluded to the “transfer of Caroni lands” in respect to schools constructed as far back as the 1990s as well as key Housing Development Corporation (HDC) projects. He said of this latter scenario: “The implications of that is that when you have to get your mortgage in order to acquire one of those [HDC] houses, you will not be able to do so because the first thing the bank or the Trinidad and Tobago Mortgage Finance Company (TTMF) is going to ask you for is proof of title. For this reason 2018 will be a year of focus on getting these leases – not just to the former workers of Caroni (1975) Limited – but to those persons throughout the country who have been waiting for security in terms of a deed so that they can organize their lives.”

In empathising with what has been deemed an inordinate delay in the processing of leases, Minister Rambharat confirmed that “a lot of work was being done in relation to the other leases” which at times have been “slow and painful” particularly due to the “tedious” task of staff having to sift through dated files. “There are those people who don’t mind waiting but they will like to know what is happening with their leases so I will continue to ask Caroni (1975) Limited, to do more in providing information to people who seek a resolution to their respective issues,” he said. The Minister added: “We could repair roads and bridges; give subsidies and assist in the purchase of chemicals and fertilizers but when I traverse the country and speak with farmers, the number one thing they want in their lives are those leases which will enable them to really make an investment in agriculture and it is therefore very important that we settle this issue once and for all.”

In respect to the residential lease disbursements to former workers of Caroni (1975) Limited, in addition to inadequate land (site) development, funding and statutory approvals – the Minister assured all attendees that he remained committed “to accelerating where possible” the Ministry’s efforts with respect to these leases “so that they can be delivered to as many persons in 2018.” He also hinted at the possibility of “surplus” residential lots of developed Caroni (1975) Limited lands becoming available to the public in the near future. “We anticipate that even after the distribution of the residential lots to former Caroni (1975) workers under the VSEP Programme, there will still be available, just over 3,000 lots for distribution to non-Caroni VSEP workers,” Minister Rambharat informed.