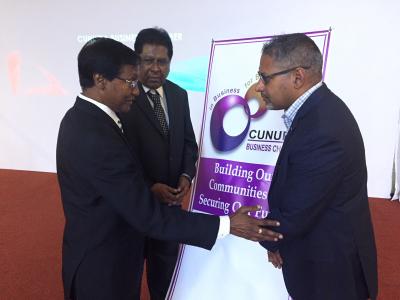 Closer attention needs to be placed on the management of cash flows and the "expense side of things" as our current economic challenges in the country continue to present unique opportunities for us - both as leaders and individuals alike - to systematically contain expenditure. These were the thoughts of Senator the Honourable Clarence Rambharat, Minister of Agriculture, Land and Fisheries and Acting Minister of Trade and Industry, as he delivered the Feature Address at the Cunupia Business Chamber 's Annual Dinner and Awards Function at the Chandelier Hall and Conference Centre in Chaguanas on Saturday 13th January, 2018. The event which marked the first of its kind for the Chamber - formerly referred to as the Cunupia Business Association since 2007 - was attended by its Executive and membership.

Minister Rambharat said that as the nation's largest employer, successive Governments have not been able to yield significant returns on its many programme investments since these initiatives - as noble as they are - were either duplicated; unnecessary; unproductive; managed by persons who lacked the skills, vision and motivation necessary to get the job done and; operated within a structure that seemed "ineffective, inefficient and bureaucratic" in nature.

He alluded too, to the significant private sector-debt which this "reliance" has incurred to the Government purse and noted its potential to impede the growth of both the public and private sectors. The Minister said: "In many cases, Ministries have not paid certain bills since June 2017 and of course, if businesses employ people and are not getting the requisite cash flows to pay their own bills, the economy just cannot move. So it not only affects the Government but has impacted the private sector severely and unless the Government reduces its indebtedness to the private sector, we will not see any movement in the economy."

In his address, President of the Cunupia Business Chamber, Mr. Rasheed Ali, reflected on the Chamber's work over the past year particularly as it involved its input in: the alleviation of traffic woes in the area; philanthropic aid to hurricane / natural disaster victims; collaborative talks with both the Ministry of Trade and Industry and other Business Chambers and; minimizing the nation's dependence on the imports of foreign food produce. Also speaking at the event was the President of the Chaguanas Business Chamber, Mr. Vishnu Charran, who welcomed the Cunupia Business Chamber to its fold and invited the entity to "extend its horizons" by forging a possible trading relationship with Cuba.

Present at the event was the Chief Executive Officer of the Powerful Ladies of Trinidad and Tobago (PLOTT), Ms. Gillian Wall, as well as the former President of the Chaguanas Business Chamber, Mr. Billy Ali, who served as the event's chairperson.