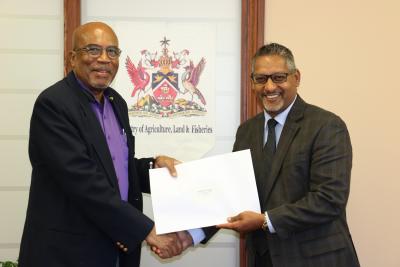 Senator the Honourable Clarence Rambharat, Minister of Agriculture, Land and Fisheries (right), is all smiles as he confers the Chairman of the Agricultural Development Bank (ADB), Mr. Winston Rudder, with his instrument of appointment at a brief ceremony held at his Ministry’s corporate headquarters in Chaguanas on Wednesday 29th November, 2017.

As a mandate to the newly appointed Board of the Agricultural Development Bank (ADB), Senator the Honourable Clarence Rambharat, Minister of Agriculture, Land and Fisheries, has instructed that there be an accelerated focus on micro lending and the optimal participation of youth in agriculture. He shared these sentiments with the Board on Wednesday 29th November, 2017, at his Ministry’s corporate headquarters in Chaguanas, following a brief ceremony to confer letters of appointment to the Chairman, Mr. Winston Rudder; Deputy Chairman, Mr. Sekou Mark and five (5) other Directors: Mr. William Benjamin; Mr. Marcus Sun Kow; Mr. Ronald Chan; Ms. Kerry Ann Harrison and; Mr. Randall Mohammed.
Minister Rambharat, in alluding to the importance of micro lending to those farmers requiring “that bridging capital in between crop production and / or payment,” said that several young people had expressed to him, their disillusionment with the limited prospects offered for personal advancement within the sector, post-training. He said: “When we talk about youth in agriculture it was just a short-term engagement in which there was a short period of training and exposure but what is next? They do not have land (nor access to land), collateral or capital to take their training and exposure any further. The youth facility that I envisaged would combine this training with access to land and access to capital and I saw the opportunity to utilize the $100,000.00 incentive (grant) announced in the 2018 Budget as a form of guarantee in an agricultural initiative which the Government regards as worthy of support.”
Mr. Rudder – whom Minister Rambharat described as having a wealth of experience in both the agricultural and public sectors – said ADB will never realize its optimal impact unless it forges strategic relationships, with both public and private institutions along the agricultural value chain. He said: “I have worked far too long to continue operating within an environment of silos and so, as important as the Agricultural Development Bank is to the development of the sector and in the diversification thrust, it will make little or no impact unless it sees itself as a partner with other significant institutions in the sector, which will in turn, provide that coherent, co-ordinated support that is required.”
The ADB Chairman said that there continued to be the perception that the ADB was “a lender to primary production” which he clarified, “could never be further from the truth”, having regard to the “reality” of what agriculture was. “Agriculture is everything along the value chain from what is produced and all the activities involved in taking it to the market,” Mr. Rudder said. He added: “The Agricultural Development Bank (ADB) is not a bank for farmers but a bank for agricultural development and agricultural development involves much more than farming.”
The Board, which was appointed – in accordance with the provisions of Section 9 of the Agricultural Development Bank Act Chapter 79:07 of the laws of Trinidad and Tobago – will serve for a period of two (2) years.