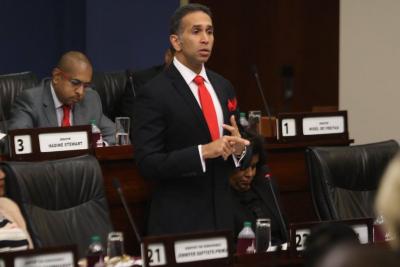 May 9, 2016: Below is the official response made by Attorney General and Minister of Legal Affairs, the Honourable Faris Al Rawi to Opposition Senator, Wade Mark regarding the Strategic Services Agency (Amendment) Bill, 2016:

May 8, 2016
Senator Wade Mark
Office of the Leader of the Opposition
Chloe Building
11A Charles Street
PORT OF SPAIN

RE: INVITATION TO THE MEMBERS OF THE INDEPENDENT BENCH AND THE OPPOSITION SENATE BENCH TO BE ADDRESSED IN RELATION TO THE STRATEGIC SERVICES AGENCY (AMENDMENT) BILL, 2016.

I refer to the matter at caption and to your letter to me of even date received by email at 6:46pm and write as setout hereunder:

1. It is a matter of public record that the UNC Government in the period 2010 to 2015 held many in camera sessions with members of the Independent bench in relation to Bills before the Parliament. There is therefore ample precedent for our approach with respect to The Strategic Services Agency (Amendment) Bill, 2016.

2. Presentations were made by the UNC Government to Independent Senators in relation to Bills including: The Central Bank (Amendment) Bill 2011; The Purchase of Certain Rights and Validation Bill, 2011; Miscellaneous Provisions (Defence and Police Complaints) Bill, 2013; and The Constitutional (Amendment) Bill, 2014.

3. The PNM Opposition was not invited to participate in any of these sessions held with Independent Senators.

4. As a Government we have taken note of several areas of misunderstanding in relation to the role, function and history of the Strategic Services Agency which we believe would be best clarified by allowing Senators the opportunity to receive information and ask direct questions on any areas of concern.

5. You will no doubt appreciate that the Opposition and Government operate under a whip in both Houses of Parliament whereas the Independents do not.

6. The Government intends in all the circumstances to address members of the Independent Bench and the Opposition Bench in separate in camera sessions as per our written invitations to all. These meetings are intended to be working meetings and not part of the cut and thrust in the Chamber.