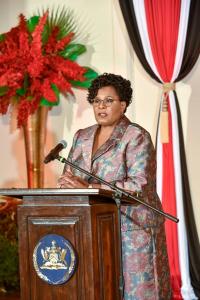 My first order of business is to congratulate you, Prime Minister, on your reappointment as Prime Minister of Trinidad and Tobago. As a people, Trinidad and Tobago has spoken and bestowed upon you the awesome and solemn privilege of leading the Government, and by extension the nation, for the next 5 years, or shall I say 60 months. I also congratulate the other Cabinet Ministers who were appointed today.
I was particularly pleased to administer the oaths of office at The President’s House this evening, as there has not been a swearing-in of a Prime Minister here since 2002, nor of a Cabinet since 2007, and I’m sure that this magnificent and historic building was happy to welcome you back.
I salute all Members of Parliament who have been victorious at the polls and thank the candidates who, though not ultimately successful, demonstrated their love for country, by offering themselves for service. It was heartening and refreshing to witness the significant number of young people putting themselves forward, in parties old and new, ready to receive the baton.
This is the appropriate time for me to express, on behalf of the nation, gratitude to those who served in Government and in Opposition over the last 5 years. Your tenure, with all its triumphs and challenges, celebrations and disappointments, was critical as Trinidad and Tobago makes its way towards developed nation status.
A change of government is a serious juncture in any country’s history. The electorate has returned the immediate past government to power, thereby affording it the opportunity to continue, complete, redirect and, where necessary, correct plans and policies, even as it conceives and executes new initiatives. Many long-standing matters remain to be addressed, among them Tobago Self-Government, constitutional reform and racism. I shall speak to the last of these in the near future. Recent issues sit on the front burner, for example, COVID-19 and illegal immigration, and new ones are bound to emerge as the Republic marches boldly into this decade.
To say that the electorate reposed its trust in its representatives to mitigate or solve these issues might be hyperbolic. Constituency by constituency, voters elected their Member of Parliament to represent them and seek their interests, but let us not ignore the fact that while some exercised their franchise enthusiastically, many did so out of a sense of duty, unhappy with the alternatives on offer, perhaps feeling the pressure of Hobson’s choice. Yet others declined to vote. I do not want us to forget, even for a moment, that at this time Trinidad and Tobago cannot be said to be a country at peace with itself.
Those of you who took the oath this afternoon gave your solemn promise to conscientiously, impartially and to the best of your ability discharge your duties and do right to all manner of people without fear or favour, affection or ill-will. This is your touchstone and you will be judged unsparingly. A democracy functions best when its standard bearers are true to their oaths of office, fulfilling their duties and upholding the expectations of the high offices to which they have been elected or appointed. Failure simply is not an option.
In normal times, the ceremony at which the Prime Minister and other Cabinet Ministers are sworn-in is usually far more lively than today’s event, with high spirits, excitement and the customary reception. Indeed, it is a pity that we cannot make full use of this expansive space, but that day will come. COVID-19 has forced us to alter convention, numbers have had to be scaled down to accommodate social distancing, masks obscure our expressions of joy and resolve, and we cannot celebrate in the manner to which we are accustomed.
But, as I administered the solemn oaths, it occurred to me that the muted ambience of this room, and the other two silos in which your Ministers to be sworn-in have had to be segregated, so to speak, provide a sympathetic background for the gravity of these proceedings. It is suggestive of the enormity of your undertaking, the sacrifices that you will have to make to do your job well and the weight of the expectation of our people. Now please, don’t bolt for the doors. Public service can be a most rewarding vocation.
I wish the Prime Minister, other Cabinet Ministers and those appointed today, all success as they set out to deliver on their mandate which, though given by some, must redound to the benefit of all.
Now I have to confess, somehow when I am in this company, auntie-tantie jumps out. And so I say to you, Prime Minister, Cabinet Ministers, on behalf of us all, I urge you to roll up your sleeves, put your hand to the plough and get down to the serious business of good governance for the people of Trinidad and Tobago.