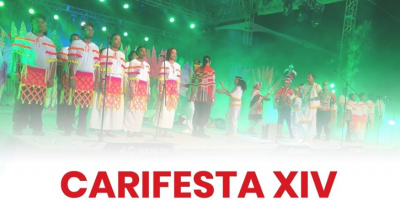 It’s my pleasure to deliver this address on behalf of the substantive Prime Minister, who is currently in Barbados.

I’m told that the Caribbean Festival of Creative Arts or CARIFESTA emerged from a collaborative appeal from artists within our region, who were at the time participating in a Writers and Artists Convention in Guyana in 1970. From its inception the main considerations for the staging of CARIFESTA are:

1) That the Festival should be inspirational and should provide artistes with the opportunity to discuss their creative expression among themselves.

2) That it should allow for the people of the Region to be exposed to the many and varying Caribbean art forms, and

It is noteworthy that the inaugural regional creative festival, in Georgetown in 1972, 47 years ago, attracted regional artistes from many Caribbean and Latin American countries and celebrated the racial and ethnic diversity of the Caribbean.

The Festival today continues to celebrate our diversity and our unique Caribbean Identity. As described on the website, it is a vision of the peoples with roots deep in Asia, Europe and Africa, coming together to perform their art forms and embrace literature inspired by the Caribbean’s own peculiar temperament.

CARIFESTA has always sought to depict the life of the people of our Region - our heroes, traditions, beliefs and creative expressions, thus illustrating the similarities and differences of the people of our Region, and creating a climate in which art can flourish so that artistes would be encouraged to return to their homelands and awaken a regional identity in Literature.

CARIFESTA V which was held in Trinidad and Tobago in 1992 was a watershed event in the development and promotion of the arts and culture in the Region. This exposition took on a new focus with linkages to national development of arts and culture, aimed at fostering harmonisation of cultural objectives across the Region.

From all reports, CARIFESTA XIV Trinidad and Tobago 2019, has been one of the most productive and prolific editions of this magnificent festival to date, with exceptionally high creativity and innovation, and record investment by the private sector.

Visitors to CARIFESTA XIV were treated to a grand market of over 300 booths including:

1. Country Districts featuring iconic facades from each country replicated to bring Caribbean history and architecture into one space

2. A Fashion District with over 30 entrepreneurs;

6. A Trade Zone and Buyers’ Market place, with 80 booths.

7. A Breakout Stage for daily local and regional performances

In addition, there were live performances by all 20 participating countries at cultural centres across Trinidad, at the Grand Stand, QPS, NAPA, SAPA, Queen’s Hall, Central Bank and Naparima Bowl, as well as a suite of literary engagement activities from open mic readings, to classes with award-winning writers and the Book Fair in partnership with Bocas Lit Fest.

There was also a special CARIFESTA Film Festival, including outdoor and indoor screenings, panel discussions, and premieres of 3 films selected by the Ministry of Community Development, Culture and the Arts’ Film Grant in partnership with the TT Film Festival.

There were visual arts exhibitions featuring our finest local and regional artistes, at the National Museum and Art gallery, NAPA, and the Central Bank, among other events. Worthy of special mention were:  Symposia entitled “Journey Round Myself” with discussions on raising our collective cultural consciousness at the UWI  A Youth Village which offered a miniature version of the festival specifically tailored for youths, at Bishop Anstey High  Best Village Competitions and Community Festivals  Tobago’s CARIFESTA Village – which opened from August 19th to 21st. Activities included the Salaka Feast and Castara Bonfire, cultural exchange workshops and ‘Island Vibes’ daily along the Scarborough Esplanade.

Chief among CARIFESTA’s main achievements were:

1. Record attendance at the Grand Market, at times in excess of 35,000 persons per day, free of charge to the public

4. Significant opportunities for local and regional entrepreneurs to expose themselves to new markets.

6. Linkages and partnerships with the local business community, such as TTMA.

7. Donations from our local corporate sector in the form of over $5 million in cash and kind towards the cost of the Festival

To sum it up, this CARIFESTA XIV in Trinidad and Tobago was a resounding success. It was incident free, of the highest quality and well attended.

Building on this Festival, the Government of Trinidad and Tobago will convert our experiences here into tangible actions affecting our national policies for the creative arts, including the development of appropriate fiscal and monetary incentives for our creative sector.

In particular, we will use what we have learnt here to revitalize our rural and urban communities with cultural showcases and unique community-oriented festivals.

On behalf of the Government of Trinidad and Tobago, and the substantive Prime Minister, Dr. Keith Rowley. I would like to thank each and every one involved in making CARIFESTA XIV the outstanding success that it has been.

Special commendation must go to the Minister and Staff of the Ministry of Community Development, Culture and the Arts and their agencies, such as the National Carnival Commission, who all worked tirelessly over the last two years to make CARIFESTA XIV a genuine Caribbean success story.

In all that is going on today, this has been for me a unifying event for our country and region and it is obvious from the overwhelmingly positive response from our people and the participation of our Caribbean brothers and sisters that everyone has enjoyed this Festival tremendously. To those who are returning home to their respective countries, I wish you a safe journey.

To the audience, I wish you God’s blessings and good night.