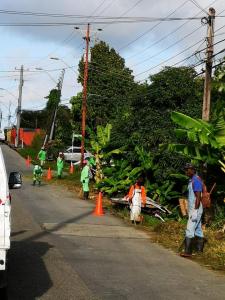 During the presentation of the Budget for Fiscal Year 2020, the Minister of Finance, the Honourable Colm Imbert, announced that workers and contractors of the CEPEP Company Limited will receive a 15% wage increase effective December 1st, 2019.

This increase will impact approximately nine thousand citizens across Trinidad and Tobago including contractors, forepersons, operators and labourers.

The Minister of Rural Development and Local Government, Senator the Honourable Haji Kazim Hosein, noted that this salary increase is well deserved saying, “I have always advocated for CEPEP workers, they are some of the hardest working people I know. I can personally attest to how much work they put in on a daily basis to keep our country clean and I am sure the country is more aware of the role that they play after witnessing them in action following both Tropical Storm Bret and Karen, earlier this year as well as other natural disasters.”

At the launch of the CEPEP Company’s National Coastal Clean-Up campaign at Manzanilla Beach in July 2019, calls were made for more commensurate wages, particularly by Mr. Keith Eddy, General Manager of CEPEP. Upon the announcement of the wage increase the Board and Management of the CEPEP Company Limited expressed appreciation for the decision saying, “First and foremost, we at the CEPEP Company Limited wish to congratulate the Minister of Finance for his excellent delivery of the budget. We would also like to express our sincerest gratitude to Minister Kazim Hosein, for his consistent public recognition of the tireless efforts of the workers in the field and for initiating this increase which will benefit many single parents, especially single mothers, who come out to work from as early as 5am.”

Minister Hosein is pleased that the Government has been able to deliver on this matter and commends workers for maintaining their impressive work ethic in the face of economic challenges, “There are some people who look down on CEPEP workers and the work that they do. I want to take this opportunity to encourage all employees to keep their heads up and to continue with their dedicated service.”