“Master of Carnival” returns to NAPA 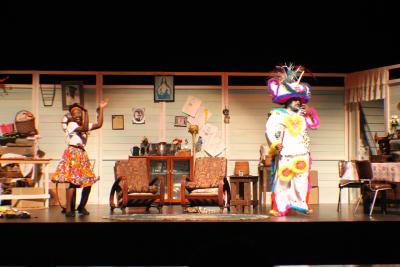 In the midst of carnival’s euphoria, there is pain and loss. This duality is part of our daily existence, and playwright Ronald Amoroso together with the National Theatre Arts Company (NTAC) will once again bring this theme to life in “Master of Carnival” on January 31 and February 1st, 2020 at the National Academy for the Performing Arts (NAPA) from 7:30pm.

Based on a short story by Euton Jarvis, “Master of Carnival” revisits the community-based Carnival of the 1950s, whose protagonist, Delpino, a veteran mas maker, sacrifices his life in an effort to win the coveted carnival crown and regain supremacy in his district’s annual competition. Amoroso transforms this story into a one act play, revealing the lesser-seen emotional impact of carnival.

Belinda Barnes, Director of NTAC says that “the play is a highly acclaimed production paying tribute to all carnival artistes who make that ultimate sacrifice for the world’s greatest festivity. It is honest and fosters an appreciation for mas of the 1950s, which was more community-centric. I am certain that audiences will have a renewed appreciation for the biggest show on earth.”

“Master of Carnival” won the first prize in the One-Act Play Competition, facilitated by the National Cultural Council of Trinidad and Tobago in 1973. It was also adjudged the Most Original Play at an International One Act Play Festival in Caracas, Venezuela, in 1994, and was published by Dr. Errol Hill in a book of ‘Three Caribbean Plays’. The show was staged last year on February 12th and 15th at NAPA, receiving rave reviews from audiences who evidently appreciated the timely staging of the production during the Carnival season.

Tickets for the performances on January 31st and February 1st will be distributed at NAPA’s Box office on January 29th from 11:00am. For further information contact 271-2894.